Many common-sense practices that help you recognize, minimize, and prevent trouble in other situations apply to the Rackspace cloud as well:

Rackspace provides tools to help you automate detection of and response to unusual situations such as workload spikes:

Rackspace provides a real-time system status view that may help you understand whether a problem is unique to you or is caused by something more general.

You can also subscribe to our @Rackstatus Twitter feed for updates on maintenance or other service-impacting events.

As a managed cloud company, we're always available for you to contact us directly. If you need help, you can reach out to us through the "Support" link at the top of the Rackspace Cloud Control Panel.

Although you can generalize basic troubleshooting practices from other kinds of computing work, some areas specific to working in the cloud may be new to you. Here are some tips which may help you understand and address cloud-related issues:

Symptom: An attempt to connect to a server fails.

Diagnosis 1: If any method succeeds in connecting to the server, the problem is not in the server itself but in some aspect of the network.

Diagnosis 2: If the server is accessible by its IP address but not by its DNS entry, the problem relates to the DNS rather than to the server itself.

Diagnosis 3: If you cannot telnet to a target IP through a target port, a firewall may be blocking your access.

Symptom: An attempt to connect between Cloud Servers and another cloud service fails.

Test and prevention: Follow the guidance at Validating SSH configuration to determine how your SSH port should be configured to enable cloud services to interact.

To learn more about troubleshooting or preventing connectivity issues, read these articles:

You can build a cloud server much more quickly than you can order a dedicated server and have it installed and configured. The build process for cloud servers is rapid but is not instantaneous. Builds can be delayed by a variety of factors.

Test: Identify factors under your control that can explain why this cloud server build is slower than others you have performed:

Diagnosis: If any of these known causes of slower builds are true of the server that you are attempting to build, wait at least thirty minutes before rechecking for success or failure. Although build times vary, all server builds eventually either succeed or fail.

Test 1: Check status.rackspace.com for any indication that you are being affected by a general problem.

Diagnosis 1: If status.rackspace.com identifies any problematic resources that seem relevant to your situation, look for a details link. 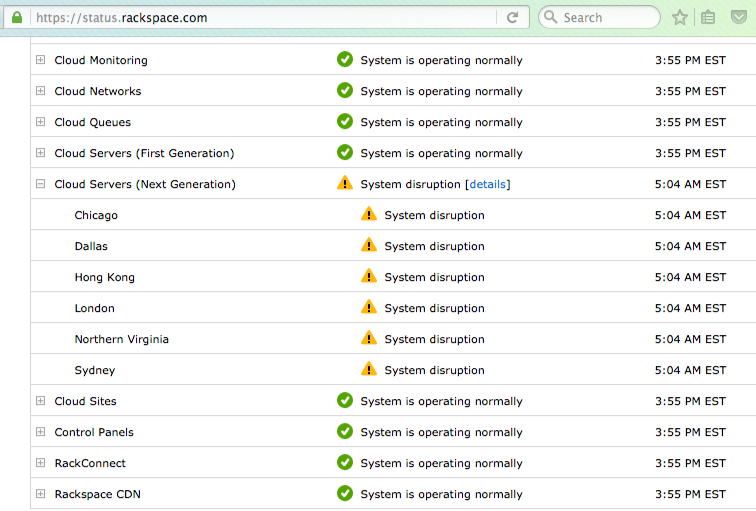 If you see any status other than "System is operating normally", look closely to see whether this resource affects you. 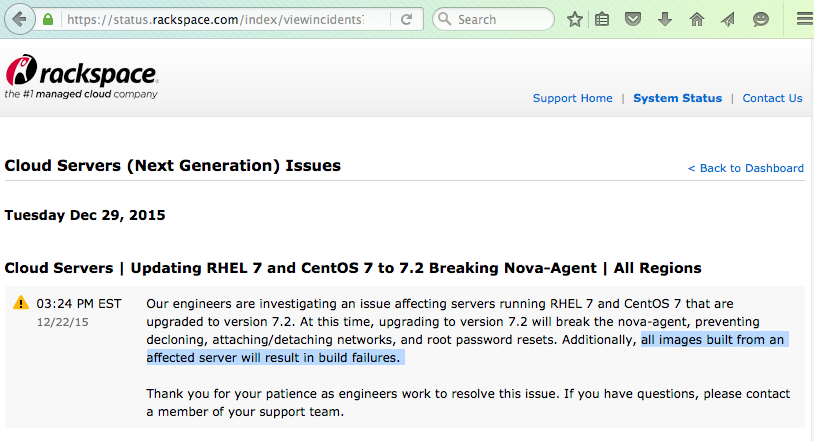 If the details are consistent with your situation, follow instructions there before contacting Support.

Test 2: Try performing the build more than once before being sure of a problem.

Diagnosis 2: If your first build attempt fails but a later build attempt succeeds, this suggests that the build system was simply too busy during the failed attempt. This can occur intermittently for brief periods during peak loads; it does not predict future failures.

If multiple build attempts fail and no general status problems match your situation, contact Rackspace Support to ask for help.

To learn more about troubleshooting or preventing server build issues, read these articles: