To use the Rackspace Metrics API effectively, you should understand several key concepts.

Data granularity defines the increments at which metric data is measured. When you fetch metrics data points by using the Rackspace Metrics API, you specify several parameters to control the granularity of data returned:

When you query by points, the API selects the resolution that will return you the number of points that you requested. The API assumes a 30-second frequency, performs the calculation, and selects the appropriate resolution. For more information, see the Data granularity section in the Rackspace Monitoring documentation.

A data point is a value stored at a timestamp bucket. If no value is recorded at a particular time stamp bucket in a series, the value is None (null).

To ingest is the process of obtaining, importing, and processing data for later use or storage in a database. This process can involve modifying individual files by editing their content and/or formatting them to fit into a larger document.

The ingest node is responsible for consuming data via an HTTP interface. It exposes the Ingest API, which enables users to upload metric data to the Rackspace Metrics database.

A metric is a measurement of activity or state on a monitored resource. Checks gather metrics and send them to the monitoring system. Based on your configurations, a set of metrics might trigger an alarm, causing a notification to be sent. Metrics can also be used to create graphs. For more information about metrics, see the Metrics section in the Rackspace Monitoring documentation.

A metric series is a named set of data points. A series is identified by a unique name, which is composed of elements separated by periods that are used to display the collection of series in a hierarchical tree. For example, a series that stores the system load average on a server called apache02 in the DFW data center might be named dfw.servers.apache02.system.load_average.

The query node handles incoming HTTP-based queries, returning raw or aggregate data for a given time period. It exposes the Query API, which enables users to submit queries to the Rackspace Metrics database by using a set of query parameters.

A rollup performs functions on a set of data that has been ingested, such as downsampling calculations and summarizing raw data to condense the size of the original data sample.

A timestamp is a point in time at which  values  can be associated. Time in Cloud Metrics is represented as epoch time with a maximum resolution of 1 second.

The following diagram provides an overview of the Rackspace Metrics architecture. 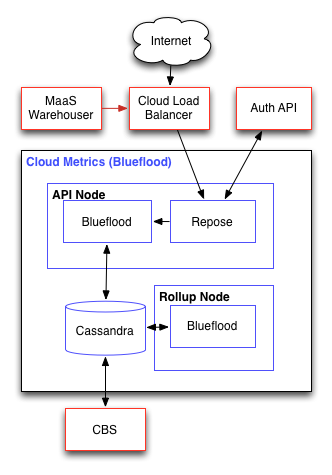 How Rackspace Metrics is used#

After signing up for the service, a user of Rackspace Metrics can push captured measurements to the system through the Ingest API over one of the supported protocols. After a period of time ranging from minutes to years, the user can use the Rackspace Metrics Query API to retrieve data to perform tasks such as data analysis and troubleshooting.