For most deployments, Rackspace recommends having two tiers of Subnets: Public and Private.

Assuming a typical two AZ deployment, four subnets would be required (two for Public and two for Private). 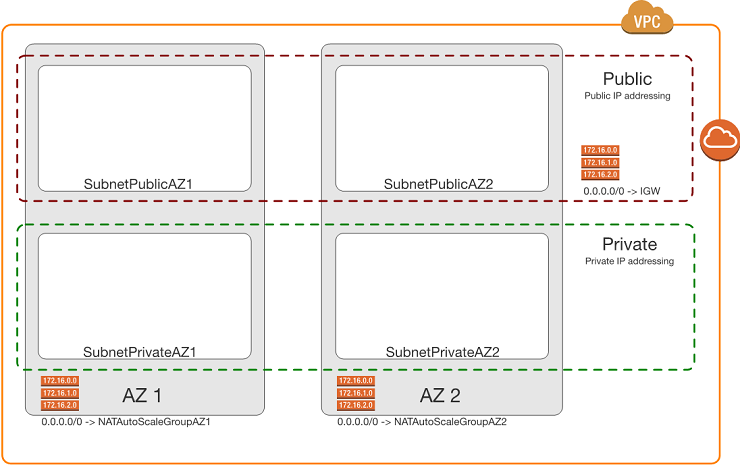 In situations where a third AZ is required (e.g. MongoDB servers in the Private subnets) then six subnets would be required (three for Public and three for Private).

It is important to note that within each tier, all the subnets will have the same network mask to simplify the operational processes (e.g. /22 for all Public subnets and /21 for all Private subnets).

Unlike traditional networking segmentation approaches that requires separate subnets (VLANs) for web, batch, application, and data tiers, AWS's use of Security Groups allows you to leverage just the Public and Private subnets, applying specific Security Groups to each tier (further info in the Security section). Thus a deployment would looks like:

It is recommend that you choose the CIDRs carefully to map with the applications' requirements; however, most AWS customers typically allocate roughly double the IP addresses for private subnets than public subnets. The default CIDRs in the BaseNetwork CloudFormation template are detailed in the CloudFormation section.