This blog discusses the Oracle Exadata Smart Flash Cache feature and its architecture, including the write-back flash cache feature.

Write-back flash cache, which is used for improving write-intensive operations because writing to flash cache is faster than writing to hard disks, is useful in running heavy jobs against a database. According to Oracle, depending on application, write performance might be up to 20 times faster to disk (measured in input/output operations per second (IOPS)) and have 10 times more write IOPS than to disk.

The cell attribute flashCacheMode determines the cache mode. The possible values are: “WriteThrough” and “WriteBack”.

To find the current cache mode, use cellcli tool and the list cell operation, as shown in the following example:

To display details, use the list cell detail command, as shown in the following example: 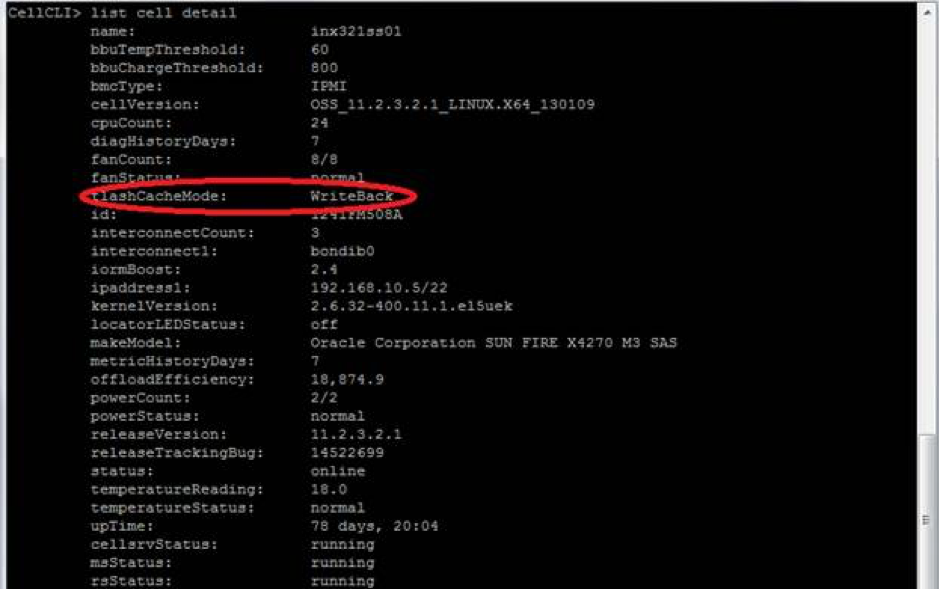 Write-back flash cache also reduces the latency of redo-log writes when sharing disks with data. Data is recoverable from flash cache on cellsrv restart. Consider using the write back flash cache feature if you notice either of the following conditions:

The following table shows the performance that the Exadata Smart Flash Cache provides at the database level for the various Exadata X4 configurations. 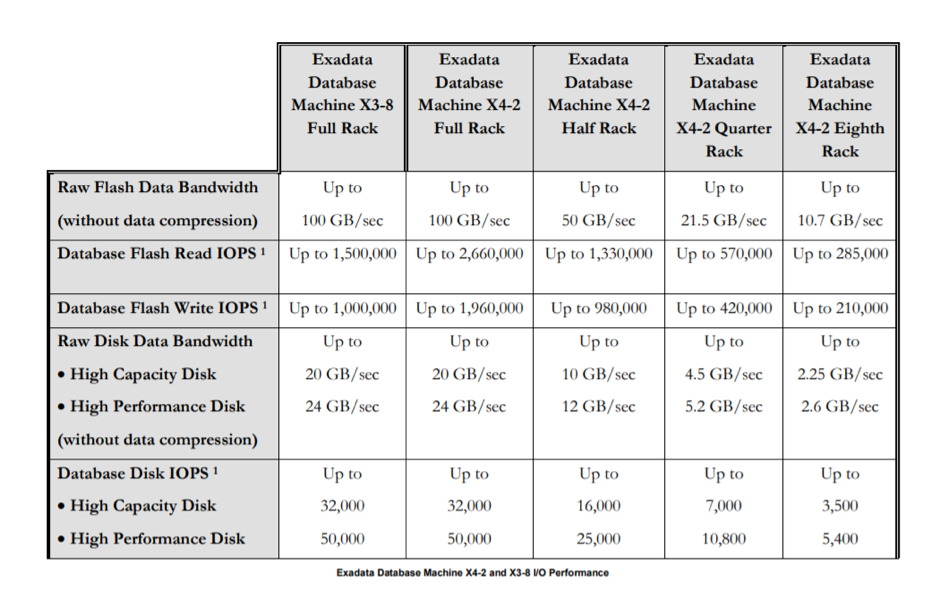 Unfortunately, there is no easy way to monitor what’s in the cache. Oracle has provided a list flashcachecontent command in the cellcli tool, but it offers no summation options and displays only object numbers.

The Exadata Smart Flash Cache is a cache on the cell (storage) server for storing redo-data until this data can be safely written to disk. The Exadata storage server comes with a substantial amount of flash storage. A small amount is allocated for database logging, and the remainder is used for caching user data.

On a full-rack exadata server, the 5 TB of flash cache can store a significant amount of data.

Flash cache can be managed automatically for maximum efficiency, as shown in the following use-cases:

You should not use all of your Flash Cache for grid disks. When creating the Flash Cache, use the size parameter to hold back some space to be used for grid disks, as shown in the following cellcli tool create flashcache command:

The biggest advantage of Flash Cache configuration is that it can be done while the system is online and servicing I/O requests.

How to enable write-back flash cache

Use one of the following methods to enable the write-back flash cache feature:

Before enabling write-back flash cache, run the following command to check the griddisk “asmdeactivationoutcome” and “asmmodestatus” properties. Ensure that all griddisks on all cells are “Yes” and “ONLINE” respectively and that the complete flashcache is in a normal state and that no flash disks are in a degraded or a critical state:

To enable list the cells, run the following command:

To enable write-back flash cache, run the following commands for each cell:

Use the write-back flash cache feature to leverage the Exadata Flash hardware and to make the Exadata database machine a faster system for Oracle database deployments. Flash storage inside the Oracle Exadata database machine is used completely as flash cache by default. This enables it to work effectively as an extension of the database buffer cache and to deliver faster access, including a very high IOPS rate, which is especially important for OLTP. Additionally, you can take a part of the Flash Storage to build ASM diskgroups upon it. Files placed on these diskgroups will reside permanently on flash storage with no caching needed.

If you have any questions on the topic, feel free to leave a comment in the field below.