The release of SQL Server technology provides lots of interesting new features for SQL administrators and developers to ponder. The Community Technology Preview (CTP) 2.0 for SQL Server vNext (generally called SQL Server 2017) is no exception. Many updates have been implemented in the existing features and services of the application. In this blog post, I discuss what is new in the database engine of SQL Server 2017 from a database administrator (DBA) perspective.

Microsoft® SQL Server 2017 is now on the scene with more new features that offer faster processing, more flexibility of use, and greater cost savings as a result. SQL Server 2016 provided many improvements, which Microsoft termed as a big leap forward. However, if SQL Server 2016 was a big leap, then SQL Server 2017 promises all that and much more of what corporate customers need at all levels. Database performance has reached a new peak with adaptive query processing, new flexibility with cross-platform capabilities, new integrations for statistical and data science analysis, and SQL Server versions on Linux®, Ubuntu® operating systems, or Docker®. The new version adds solid technology with cost savings.

The changes introduced in SQL Server 2017 discussed here include the following features:

SQL Server is no longer just a windows-based relational database management system (RDBMS). You can run it on different flavors of the Linux operating systems. You can also develop applications with SQL Server on Linux, Windows, Ubuntu operating systems, or Docker and deploy them on these platforms.

This feature resumes an online index rebuild operation from where it stopped after events such as database failovers, running out of disk space, or pauses.

The following images show an example of this operation:

When you perform online index operations, the following guidelines apply:

SQL Server 2016 integrated the R programming language, which can be run within the database server and can be embedded into a Transact-SQL (T-SQL) script, too. In SQL Server 2017, you can execute the Python script within the database server itself. Both R and Python are popular programming languages that provide extensive support for data analytics along with natural language processing capability.

SQL Server 2017 adapts optimization strategies to your application workload’s runtime conditions. It includes adaptive query processing features that you can use to improve query performance in SQL Server and SQL Database.

There are three new query improvements as shown in the following diagram: 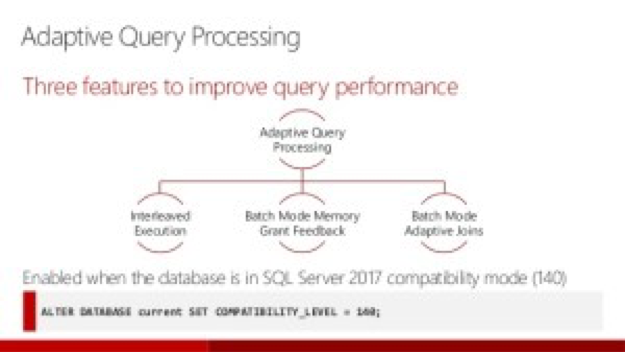 The SQL Server database engine may use different SQL plans to execute the T-SQL queries. Query plans depend on the statistics, indexes, and other factors. In some cases, the new plan might not be better than the previous one, and the new plan might cause a performance regression. Whenever you notice a poor plan choice regression, you should find a previously used good plan and force it to be used instead of the current one by using the sp_query_store_force_plan procedure. The database engine in SQL Server 2017 (v. 14.x) provides information about regression plans and recommended corrective actions. Additionally, the database engine enables you to fully automate this process and let the database engine fix any problems related to the plan changes that are found.

The automatic plan correction is shown in the following diagram: 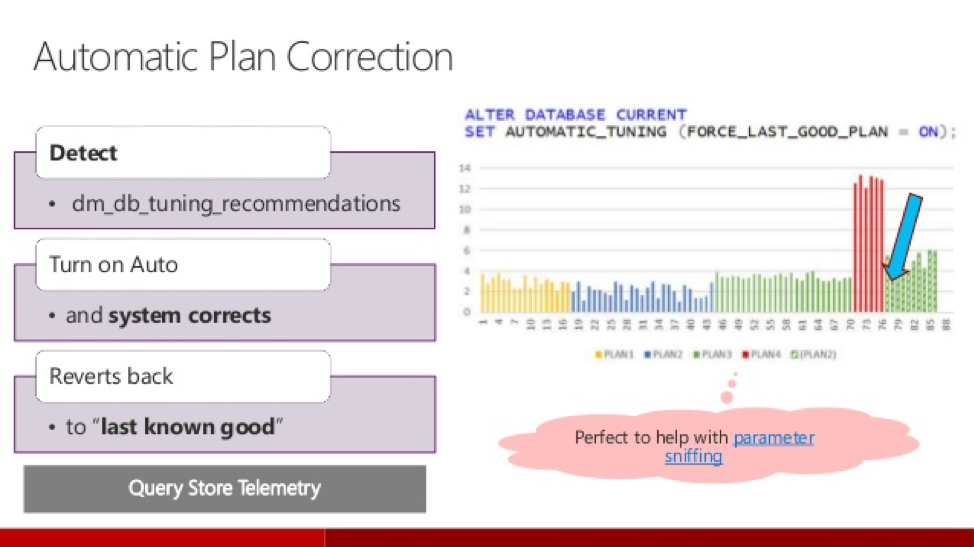 SQL Server 2017 setup now enables you to specify the initial TempDB file size up to 256 GB (262,144 MB) per file, with a warning if the file size is set greater than 1GB without instant file initialization (IFI) enabled. It is important to understand that, depending on the initial size of TempDB data file specified, not enabling IFI can cause setup time to increase exponentially.

In SQL Server 2017, you can provide the filegroup name on which to create a new table by using the ON keyword with the SELECT INTO statement. The table is created on the default filegroup of the user by default. This functionality was not available in previous versions.

This functionality includes the following features:

The dynamic management views (DMVs) include the following elements:

The in-memory changes in SQL Server 2017 include the following enhancements:

Gain mission-critical uptime, fast failover, easy setup, and load balancing of readable secondaries with enhanced Always On functionality in SQL Server 2017. This is a unified solution for high availability and disaster recovery on Linux and Windows. You can also put an asynchronous replica in an Azure virtual machine for hybrid high availability.

SQL Server 2017 introduces the following changes to the way queries and statistics are collected and displayed: