In the past, stateful firewalls with simple packet filtering capabilities efficiently blocked unwanted applications because most applications met the port-protocol expectations. However, today, blocking web applications such as Facebook, Twitter, and other applications that use port 80 might lead to complications with the entire HyperText Transfer Protocol (HTTP) protocol.

Protection based on ports, protocols, or Internet Protocol (IP) addresses is no longer reliable nor workable. This fact led to the development of an identity-based security approach, which takes organizations a step beyond conventional security appliances that bind security to IP addresses.

NGFWs offer administrators a deeper awareness of, and control over, individual applications, along with the firewall's deeper inspection capabilities. Administrators can create very granular allow and deny rules for controlling access by websites and applications in the network.

Newer firewall technology can also filter traffic based on the applications or traffic types traversing specific ports. For example, you could open port 80 for only selected HTTP traffic, or for specific applications, sites, or services that you allow. Think of it as blending the firewall and QoS functions into one solution.

These application-aware firewalls are commonly known as an NGFW, and they are a type of unified threat management (UTM) solution. The term UTM is usually applied to products that lack true application-awareness and are targeted towards the small and midsize business (SMB) market. UTM products usually offer more functions than traditional firewalls, such as antivirus, antispam, or even intrusion prevention systems (IPS).

The fine tuning of traffic provided by NGFWs can help with both security and bandwidth control. Because NGFWs are smarter and provide deeper inspection, they have the potential to catch more malicious activity. They can also serve as content filters and provide QoS functions so that higher priority applications receive more priority bandwidth. Along with providing better overall security, NGFWs are in demand due to the increase of cloud services offerings and outsourced software as a service (SaaS) providers.

Here are the common features of most NGFWs:

When the first firewalls were developed and deployed, their primary role was to act as guards, monitoring the traffic moving into and out of the network. These devices would look at packets, network addresses, and ports to determine whether data should be allowed through or blocked.

Then application traffic took off, and first-generation firewalls could no longer keep up because hackers were able to hide malware (that could not be identified easily) inside the application traffic. This led to the introduction of a second generation of firewalls, or NGWFs. This new tool can identify and block malware in applications and is similar to an X-ray machine this is used for security checks at airports. Over time, compatible security inspection technologies were added to the process, such as IPS, application control, and anti-malware.

Today, things are more complicated than ever. Rather than networks becoming borderless, they have become porous, with points of access and endpoints multiplying at an unprecedented rate. Almost 60% of enterprise traffic is encrypted, and hackers are increasingly deploying encrypted malware. As a result, the Gartner Enterprise Firewall MQ 2017 predicted that almost 50% of enterprise customers will soon require SSL inspection capabilities, compared to only 10% today. In addition, increasingly sophisticated, multi-vector cyberattacks are being designed to bypass traditional edge security and evade conventional detection.

Decryption, deep packet inspection, and threat correlation are extremely CPU-intensive and are well-known for bringing even high-end commercial NGFWs to their knees. As malware and threats become increasingly difficult to detect at the access point, it’s necessary for security to span the network to monitor behaviors and uncover intent.

Formerly known as the FireSIGHT® Management Center, the FMC is the administrative nerve center for select Cisco security products running on many different platforms. It provides complete and unified management of firewalls, application control, intrusion prevention, URL filtering, and advanced malware protection. The Management Center is the centralized point for event and policy management for the following solutions:

The FMC provides easy-to-use policy screens to control access and guard against known attacks. It integrates with the advanced malware protection and sandboxing technology, and it provides tools to track malware infections throughout your network. It unifies all these capabilities in a single management interface. You can go from managing a firewall to controlling applications to investigating and remediating malware outbreaks with ease. 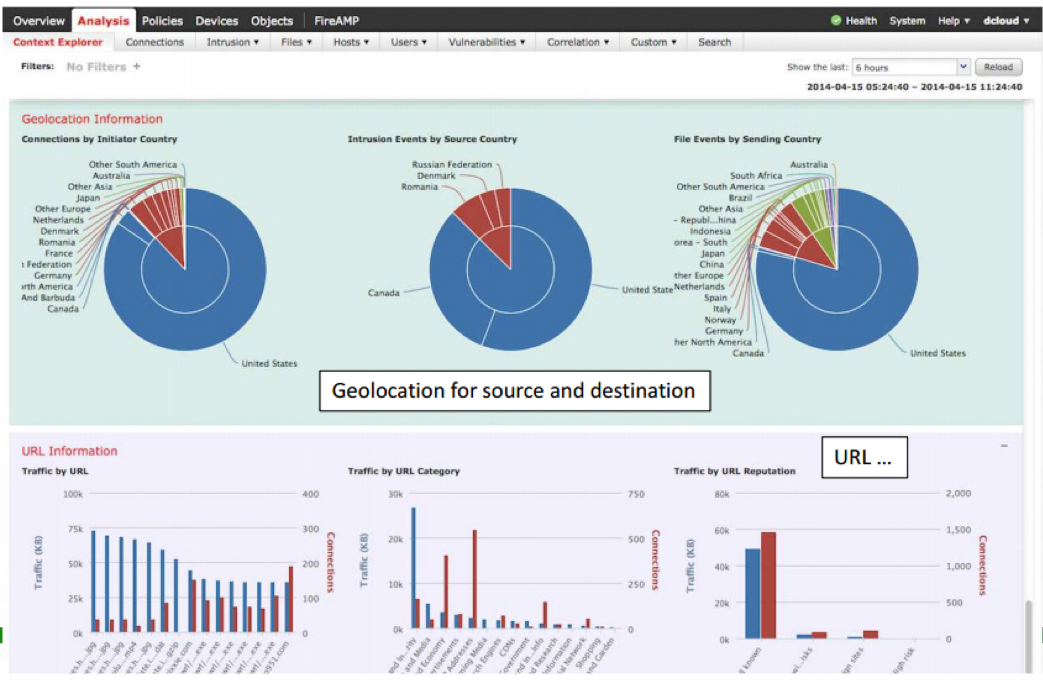 Management before, during, and after an attack

The FMC provides unified management across the entire attack continuum—before, during, and after an attack as shown in the following image.

Before an attack, the FMC does the following tasks:

During an attack, the FMC does the following tasks:

After an attack, the FMC does the following tasks:

Supported models and services are shown in the following image:

Cisco acquired the cyber-security firm Sourcefire, in October 2013 and completed the acquisition of ThreatGRID in June 2016, which provided dynamic malware analysis and threat intelligence technology.

The FMC is available as a dedicated server or a virtual image appliance (Linux®-based VM server) that connects to the FirePOWER or FTD and allows you to fully manage either system. Organizations with multiple FTD systems or FirePOWER Services register and manage these systems from the FMC.

Alternatively, users can manage the FTD device by using a Firepower Device Manager (FDM) such as an adaptive security device manager (ASDM).

Currently the latest FTD unified software image is available in version 6.2.x. The FTD is continually expanding the NGFW services that it supports, including the following services:

The following sections provide selected details from the release notes for versions 6.2.3.1 through 6.2.3.5.

You can now configure site-to-site VPN with clustering. Site-to-site VPN is a centralized feature, and only the master unit supports VPN connections. This feature is supported on the Firepower 4100/9300 platforms.

You can deploy the FMC as a physical or virtual appliance, or from the cloud. You can choose which options work best for your environment and deploy it on any of the following platforms:

Configuration for the ASA FirePOWER module

The procedure shown in the preceding image shows a connection to the ASA console port that you can paste into a new configuration to configure the following behavior:

To reproduce this configuration for a Cisco AS 5506-X, perform the following steps:

By combining ASA with FirePOWER Services, you can consolidate multiple security layers in a single platform and eliminate the cost of buying and managing multiple solutions. This integrated approach combines best-in-class security technology with multilayer protection integrated in a single device that is cost-friendly in comparison to the disorganized security solutions.

It also provides support for a throughput of 300 Megabits per second and has high-capacity solutions like the ASA 5585-X with FirePOWER SSP 60 supporting up to 20 Gigabits per second. Cisco offers a broad range of solutions regardless of capacity, which in turn provides a solution to organizations of any size.

The Cisco ASA 5500-X NGFW helps midsize organizations to meet these security challenges and stay ahead of today’s emerging threats with collective security intelligence. It enables administrators to see and control user activity, device access, and malicious behavior. It reduces complexity, capital, and operating costs with fewer devices to manage and deploy.

If you liked this blog, share it by using the following icons: