We have had a number of customers request the need to be able to create their own Cloud Servers images rather than taking snapshots from our base installs. To fulfill this need, we are announcing a new tool as a preview today called boot.rackspace.com. The tool enables you to utilize the various Linux distributions installers to install directly to the disk of your Cloud Server. <!-- more -->

Each option will either kick off the install kernels from the various operating systems or automatically load up the ISO to the Cloud Server. From there you can customize your Cloud Server to your hearts content and install directly to the OS disk. Once completed, you can install the Rackspace Cloud Agent, take a snapshot, and then redeploy the image as your golden master. We have also initially included a few useful tools like Clonezilla for moving data around. 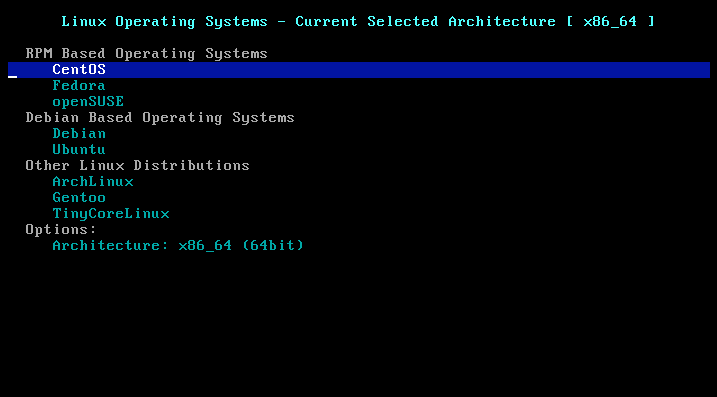 We've put all the source for the iPXE scripts on Github and welcome contributions. We've also written up some how-to's on Rackspace Cloud Servers image creation which will enable you to create images just like our base images.

As contributions are accepted, they will be deployed to the site automatically. Because of the flexibility iPXE provides, you can also create your own custom menus, host them on your own site, and chain load them from the iPXE command line.

The tool currently *only works on the newer Performance Flavors* (not Standard) so please keep that in mind when using the tool.

Using Outside of Rackspace Cloud

The README also contains instructions for using the tool outside of Rackspace Cloud Servers. Using the iPXE ISO is great for working on your own servers (DRAC, iLO, etc) in the Datacenter because it's very lightweight and provides a lot of options at your fingertips as you can stream all of the needed packages over the network instead of using a large DVD/ISO.

The iPXE community is great and very helpful. If you'd like to learn more about how network booting works, make sure to check out networkboot.org.

How to Get Started

So in summary, to get started, you can boot a server using the API with the image id:

and then connect to the console of the server. Current and future image id's will be tracked here. If you have any questions or feedback, please don't hesitate to open up a github issue or contact us at bootrax@rackspace.com.

Antony Messerli is a Principal Engineer at Rackspace working on the Cloud Servers Engineering team. You can follow him on twitter @ajmesserli and on Github as amesserl.