Installing OpenStack has always been challenging. Due to the complexity and varity of design choices involved in setting up OpenStack, automated installers are rare. For those who need a small but realistic setup, to be used either for development or learning, a manual installation using the desired distribution's packages has been the typical solution. Distribution packages simplify the process, however they come with compromises.

First, packages are only updated monthly, so the wait for patches is slow. Additionally so far the QA process for the various distributions is a little spotty, so the if a package is broken when the update occurs is may be a month until the problem is fixed. Secondly applying a much needed patch from source may break a package installation or have the patch overwritten when a package update occurs.

For those testing or developing OpenStack, using a package based install would be impossible, since the packagers place files in difference locations and make it impossible to push source files to the OpenStack github based repos. For this most developer use devstack as their install vehicle. Devstack is a great tool to get a simple OpenStack environment running but It can be cranky and difficult to get multi-machine OpenStack environments running.

The choice is to install OpenStack from source. For most folks, source installs are undesirable and messy, but since OpenStack is completely written in python, source installs eliminate the temperamental and slow compilation step. Additionally since each service also has its own python requirements file, the python installer uses pip to install any python dependencies. This greatly simplifies the installation process and results in an install that can be used for either development or production. It is worth noting that some newer OpenStack installer projects such as stackforge's os-ansible-deployment have moved to source installs. Currently it is located at this stackforge GitHub repository. The ansible installer is now part of the OpenStack big tent efforts and shortly will be located at a repository within the openstack organization.

This discussion demonstrates how to install OpenStack from source onto three machines using Ubuntu 14.04 LTS as the base OS. The three nodes consist of compute, network and controller nodes, using separate control and data planes, an access/API network and one external network connection. Each node needs at least 3 NIC cards (the network node needs 4). Users are able to create simple legacy routers and an external provider router. The following diagram gives a physical representation of the final OpenStack system. 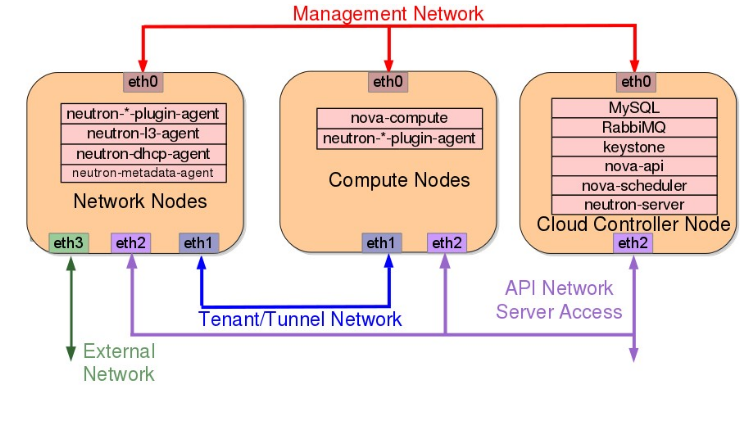 This install uses KVM, running through libvirt, for virtualization, but it can be easily modified to use QEMU for those who have hardware that doesn't fully support virtualization. The compute nodes needs to be tested to verify that the CPU(s) can support KVM by running:

The basic source install process for each node is straightforward and similar for each service that runs on a node. To install an OpenStack service we need to complete the following for each:

Let's get started installing keystone on the controller node.

Begin by updating all three of your nodes. On all nodes run:

Set some initial shell variables which are used in the installation to simplify the install process. MY_IP and MY_PRIVATE_IP should be the IP for the NIC card on the controller to which the the management plane is assigned. Again perform this on all three nodes.

Install RabbitMQ and set rabbit to only listen on the control plane interface:

Install mysql and set it to listen on the control plane interface (set the mysql root password to mysql for this example. Use a more complex password in production.):

Use mysql_secure_installation to remove the anonymous user:

Create the database for keystone and set access permissions for the keystone user:

Create the various users and directories needed for the OpenStack services. The following script creates these for each of the services on the controller node and should be run using bash (not sh): (a similar script is available for the network and compute nodes with fewer services)

Clone the keystone github repo move into the newly created keystone directory and use the python install process to install keystone: ( this can be changed to point to any release by changing the kilo in the next line, or to install from trunk by removing the -b stable/kilo)

Copy the sample keystone conf file provided by the keystone project and set the database and token info within the file: Note: For a production system, set a more complex token than what is used in this example.

If for some reason keystone doesn't start, the following can be used to try to start keystone for troubleshooting: (only run this if the previous step doesn't show a keystone process running)

Create the credentials files used by the openstack commands to authenticate to keystone:

Set up the keystone's PKI infrastructure:

Load the shell variables needed to access keystone and verify that it is responding:

Initialize some shell variables used by the sample_data script that populates keystone with its initial data:

Use the supplied sample data script to populate keystone with initial service information and endpoints:

Verify that there is valid data in keystone:

Congratulations, keystone should now be installed and running. In the next article of this series, we will install glance and neutron on the controller node.