The need for access to high-speed, low-latency storage systems has become commonplace in today's server industry. Remember, only a few years ago, people considered SATA and SAS SSDs too expensive for everyday storage use.

Today, storage systems commonly consist of nothing but NAND-based products. I remember back in 2015 reading about multimillion-dollar storage systems that could provide a few million Input/Output Operations Per Second (IOPS). Here we are in 2020, and I can exceed those numbers with a single system and for a few thousand dollars. Simply amazing.

Peripheral Component Interconnect (PCI)-based storage has had a mixed past with Fusion-IO®, providing proprietary systems and drivers for high-speed performance. Luckily our industry overcame those vendor-centric models and delivered on a standard interface for PCI storage. Non-Volatile Memory Express (NVMe) is the common name for providing NAND storage over a PCI express interface. It has an advantage over SAS and SATA in terms of protocol simplicity, bandwidth, and driver stacks designed for low latency and high throughput. NVMe storage technology has been the industry leader in server storage performance. In its early days, NVMe was only available in a PCI half-height half-length (HHHL) card. This format made it difficult to scale systems to leverage a lot of NVMe storage.

Realistically, it was not feasible to install more than two or three NVMe devices per central processing unit (CPU). Now that U.2 (2.5 inch 15mm) form factors are readily available, scaling NVMe devices is as easy as scaling SAS or SATA devices.

Because today you can easily scale your Rackspace® server to allow up to 12 NVMe devices, you have a new set of problems to think about. First, although these devices are much less expensive than they used to be, they are still relatively costly. How do you ensure that you are getting the most out of your investment? Second, because these devices connect directly to the processor PCI bus, how do you ensure that performance and latency are predictable and consistent?

We ran two simple experiments, one with NUMA control and one without NUMA control. Then, we explore the comparative results for latency, bandwidth, IOPs, and deviation of results between runs.

To better describe the experiment, let me provide an example. With NVMe, storage attaches directly to a Peripheral Component Interconnect Express (PCIe) controller. That PCIe controller is embedded into the CPU package. If your server has one CPU, then all PCIe access is local. This configuration means the process that accesses the storage runs on the CPU where the storage is located. If your server has more than one CPU, then there is a possibility that the process accessing the storage is running on a CPU that does not have the PCI controller with your NVMe devices attached. Let's call this non-local access.

For non-local access to function, the CPU running the process must reach across the QuickPath Interconnect (QPI) links to access the other processor's PCI controller. Every time this happens, this should create some measure of latency. This experiment determines the impact of local and non-local access, as shown in the following images:

For inducing I/O work on the drives, we leverage flexible I/O tester (FIO). We are familiar with this benchmark, which includes the capability to direct the storage I/O processes at specific CPU cores. This setup works perfectly to allow both uncontrolled and controlled storage access.

We first ran an experiment to determine how many threads were required to push each SSD drive to its advertised performance limit. In our testing, we found that it took four threads of FIO with 64 outstanding operations to keep the drives completely busy and running at their advertised read limits. We then needed to understand the system's architecture. It is not always obvious what PCI lanes are attached to which NUMA domain. For this, we used a Linux tool called lstopo -v and the output of the ls -al /sys/block/ command.

The following image shows our system: 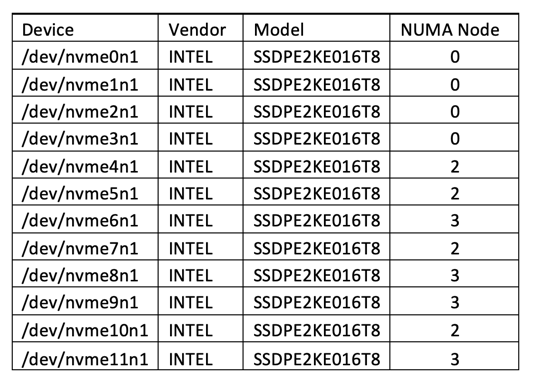 With the output of lspcu, we could quickly determine what CPU cores were in each NUMA domain, as shown in the following image:

With these details ironed out, we now know what CPU cores to leverage to access each NVMe device locally.

Our experiment has the following two test scenarios:

Run the following command ten times. It performs random read access on all drives at once and does not implement any NUMA control. It reads for a total of 100 seconds and uses a 30 second ramp time.

To make this work, we needed to inject the following additional commands options into the above script:

This operation causes FIO to isolate memory to correct NUMA regions as well as to only run FIO processes where we want it to. All other command parameters like threads, outstanding I/O, and run/ramp time remain the same.

Here are the results of our experiment.

As is typical in most storage performance benchmarking, this study uses IOPS as the metric to determine total storage throughput. Specifically, in our tests, we used an IOP size of 4 kilobytes. Over the ten runs, we consistently saw more than 6.3 million random 4k I/O operations with NUMA controls in place. With NUMA controls not leveraged, the system inconsistently ranged from a high of 6.2 million to a low of 6.071 million IOPS. Although a single system doing over six million IOPs is insanely fast, no one wants to leave performance on the table. 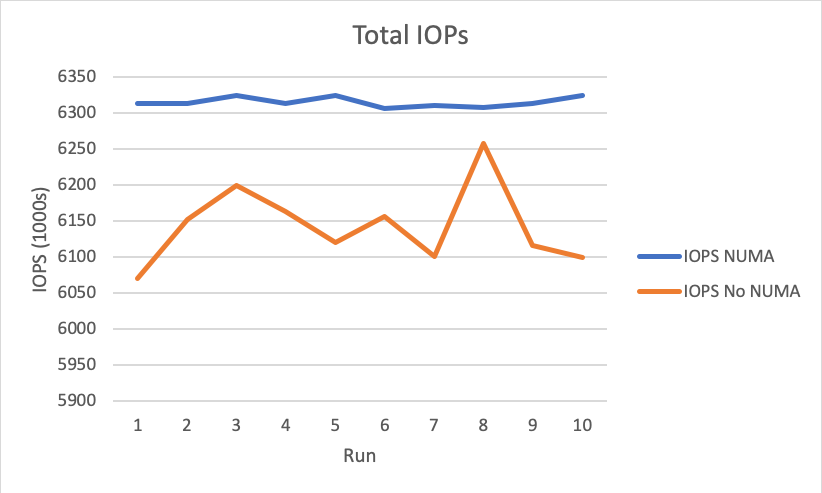 Outside of just monitoring for total throughput, we also measured the average latency of I/O operations during the ten test runs. 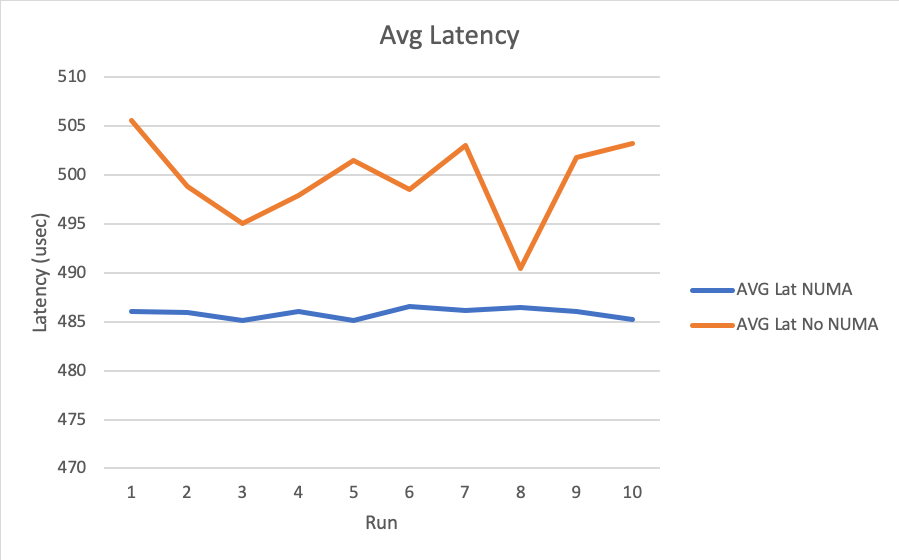 Another way we wanted to look at this was in terms of per-drive consistent performance. For each of the ten passes, did the same drives always have a variance in performance? We first calculated the average IOPS for each drive across the ten runs.

Then we calculated the standard deviation (stdev) for the ten runs for each drive. The following graph represents the stdev as a percentage of the total operations performed. 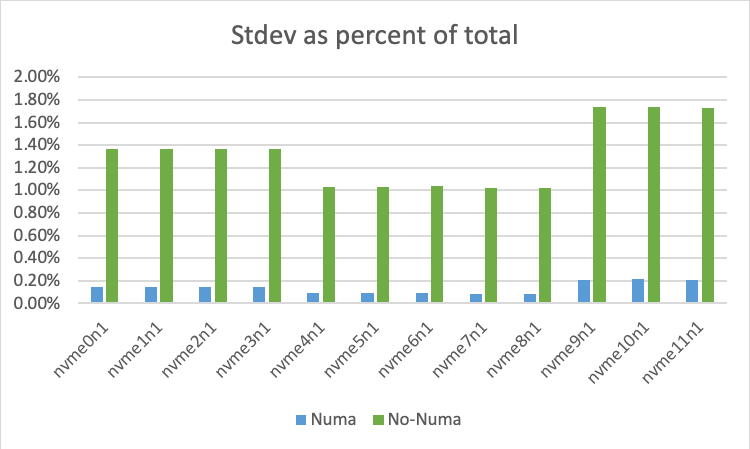 Overall, our results show that leveraging NUMA to control process access to NVMe devices can provide not only an increase in overall throughput but also decrease the variability in system storage performance.

Visit www.rackspace.com and click Sales Chat to start a conversation.