A question that often comes up is "why should I use config management when I can just use images?" In this article, we’ll explore the differences between images and configuration management, and talk about the benefits and drawbacks of each.

The case for images

The primary use case for images is to quickly spin up a base server that you can then make minimal modifications to in order to reach your desired end state.

Another common use case is to use imaging as a way to create backups of running servers. This however is not a good backup strategy, which we'll discuss in the next section.

The case against images

Images are by definition inflexible and out of date because as soon as you build an image, any change to the base server will invalidate the image you took. Images are also more difficult to backup safely and add an additional layer of complexity in deployment.

As mentioned above, taking an image of an instance does not make a backup. There are several reasons for this: 1. Snapshotting an entire disk will capture far more data than is actually needed for a backup. Backups should focus solely on the important content. 2. Snapshots do not stop processes that may be writing to the filesytem (i.e. your database). 3. Using images as a backup means you'll probably be overzealous with your snapshots because you'll be taking snapshots of multiple machines possible capturing the same data multiple times. 4. File-level restore is very difficult if not impossible with a snapshot. This also doesn't scale far as you get into tens or hundreds of machines.

The case against configuration management

Complexity can be a big issue for some since it means a larger learning curve and can seem like more to manage. It can also require bringing more people up to date with the new way of doing things, which can be expensive in both time and money.

It's also easier to log in and make a small change on a machine instead of following a complicated process to change a cookbook, upload it and re-run you configuration management tool. 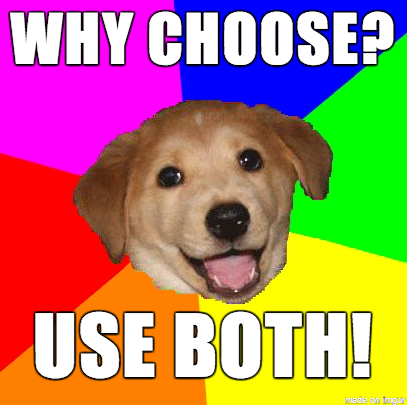 The case for configuration management

One of the biggest benefits of configuration management is speed of deployment. When using configuration management, you define all of the steps needed to go from a base image to a fully configurable and usable image. By doing this you take out a lot of downtime between steps of deployment. You are able to enter one command, which will create an instance, configure it and then start using it. You can even speed this up a little further, but I'll get into that soon.

Next is consistency. Positive confirmation of the state of an instance can be a powerful thing. By using configuration management you are able to ensure that your systems are in a known state. If you need to edit your sshd_config file to deny root logins, you can do that to all instances at once and be told if the configuration applied correctly. You can also ensure that your backups are done consistently and even verify them in an automated manner.

Configuration management also brings flexibility to the application by allowing the configuration you deploy to inspect the environment for the status of other instances. For example, we can do some automated configuration of an Apache server's environment variables by searching for the values that those variables need to be and automatically setting them (issuing a reload if the file changes). If you add or remove an instance whose value causes one of the variables to change then it updates automatically. This allows you to be more dynamic and flexible with your deployments.