Creating a VM in Azure by using Terraform with for loops

You can easily create multiple virtual machines (VMs) on Azure® by using Hashicorp® Terraform® with the help of Visual Studio® Code (VS Code).

This blog post focuses on bulk VM creation on Azure. I also emphasize the Infrastructure-as-Code (IaC) approach. I use VS Code throughout this blog, but you can use your favorite IDE.

I went through the general requirements to create multiple VMs in Azure with some specific standard or typical nomenclature. Even when we build stuff on the fly, we have to keep an eagle eye on everything to sustain our standards. And maintaining the standard is not at all easy, mainly because we have to follow the same name canons for VM name, OS disk, data disk, network interface controller (NIC) name, and so on.

IaC lets us manage every aspect of maintaining standards, including things we build in the backend on the real surface.

I have written some simple Terraform code to create two VMs in Azure with similar names for every resource. I also use tags, which are the new way of segregating things. So, let's straight jump into the action and get our hands dirty with Terraform.

Azure VM creation requires a resource group (RG), virtual network (VNet), subnet, NIC, and VM configuration. Keeping all that in mind, let's make all the files separately so that it is easy to understand.

First, we need to create an RG code block in the Hashicorp configuration language (HCL). Let's create two RGs (one for the VM and NIC and another for Networking stuff). As a best practice, I don't recommend keeping everything together. Before creating the RGs, define a provider block for Terraform, so it understands that we are deploying Azure resources. Store this information for Terraform in a separate file called providers.tf: 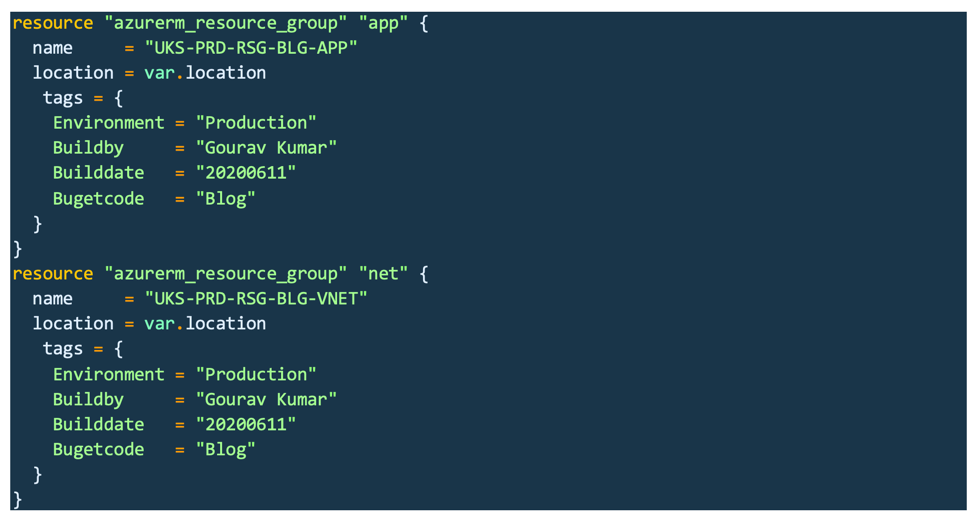 Create the VNET and subnet files

Now, the second task is to create a VNet and a subnet for our VM.

And the subnet code, subnet.tf:

We are almost done with networking stuff except for our VM's NIC. Let's put the NIC code in the VM's RG. Notice that I referenced the app RG in resource_group_name because keeping NIC details in the Network RG does not suit me. 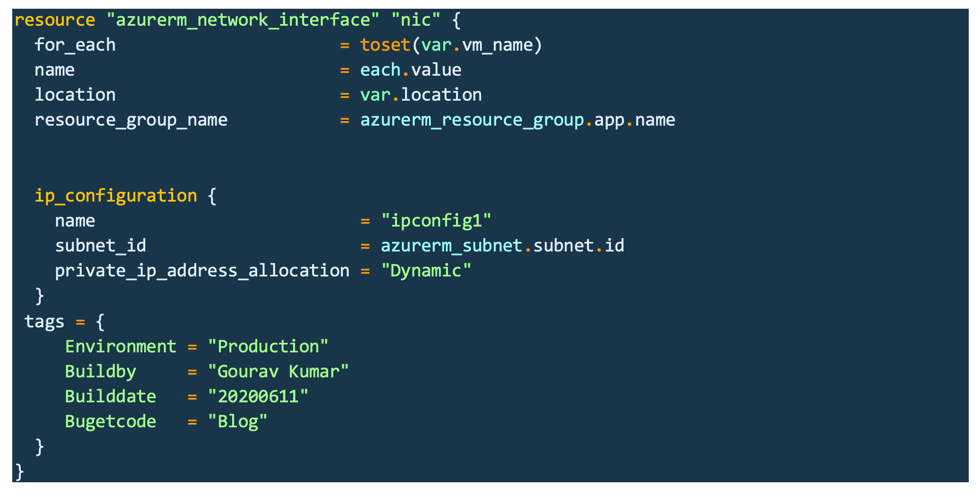 Now we are done with all the networking stuff, but most people consider a VM without diagnostic settings enabled to be a poor build. And I don't want anyone to call me a "new builder"! Storage account code is simple, and by using that, we can call ourselves good Azure implementors.

We are all set for VM code, but remember, we have to use the same standards that we used earlier, such as VM name, NIC name, disk name, and so on.

Final code for our VM, vm.tf: 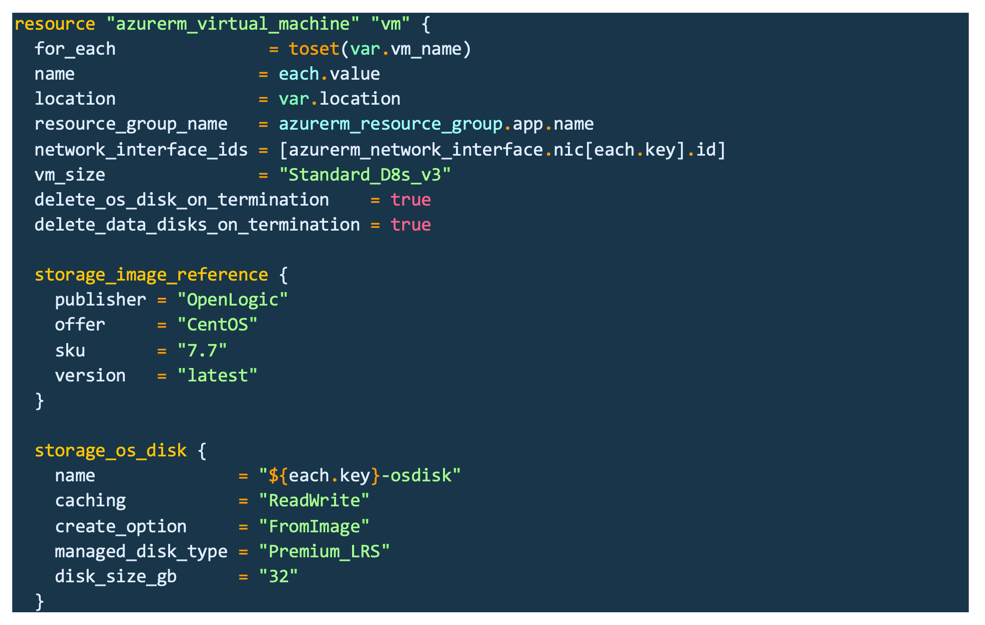 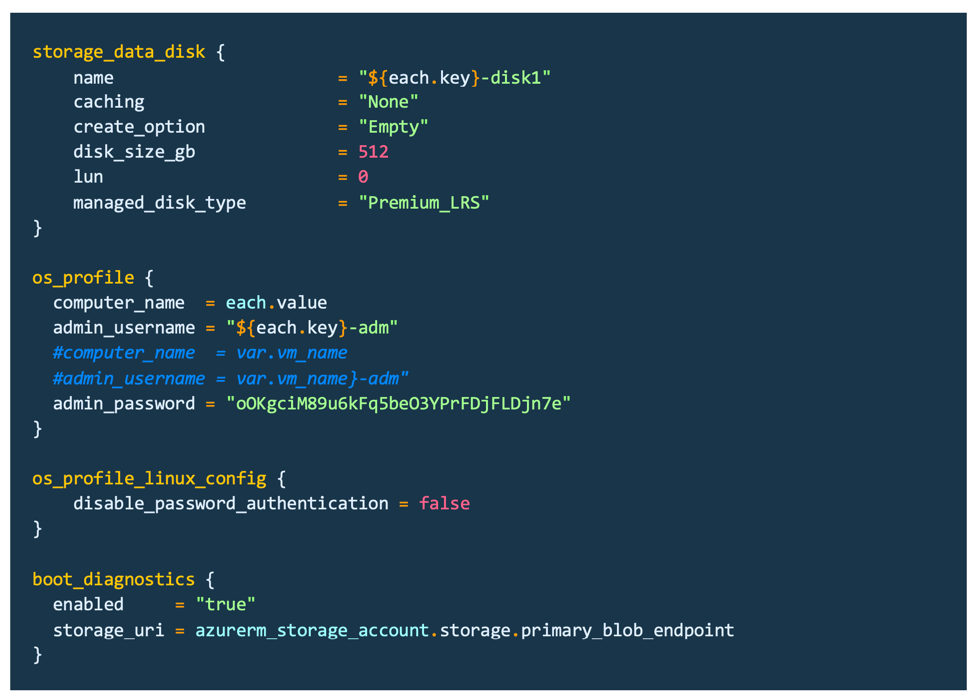 Finally, I put a few things into variables such as all the VM names. You can put other items into variables, such as RG, VNet, and subnet names. Using variables helps when you do giant builds.

My goal is to create two VMs by using a for loop. Thus, the vm_name variable has two VM names (you can add multiples), and the second variable is the location to which I want to deploy the Azure resources.

Let me share how I keep my standards intact: I used VMName-nic for every NIC, VMName-Osdisk, and -data1. All resources such as VM, NIC, and DISK pop up with the same nomenclature, thus, we can easily understand which resources belong to which VM.

Let's get down to business and learn how to deploy the VMs in Azure. It's time to boil the eggs.

For simplicity, I use the Azure CLI for this task instead of using a proper DevOps approach and running this through a pipeline and storing the site files somewhere other than our directory.

If you don't have the az CLI on your machine, you can install it.

Some secret for loop hacks

You can create multiple VMs by running a Terraform for loop as shown in the following code. The loop executes as many times as you defined the variable (twice, in our case, because I defined two VM names in the variable):

The for loop in Terraform has a key-pair, key and value, but both are generally similar.

In resource blocks, where you set for_each, you can use an additional each objects in your expressions to modify the configuration of each instance.

An each object has two attributes:

You can use the Terraform fmt command to format the code, such as rewriting Terraform configuration files to conform to a canonical format and style. This command applies a subset of Terraform language style conventions, along with other minor adjustments for readability.

Have fun using Terraform for Azure and maintain standards with some simple code.

Gourav Kumar
An Azure professional, blog writer, and community contributor who is passionate about PowerShell, I'm also learning Terraform and forging my path to be on top.