Agile. Scrum. Extreme programming. RAD. Lean. These terms all represent a departure from the traditional Waterfall development process in favor of a more rapid, iterative approach to application development. For companies with large-scale web applications, there are significant benefits to the agile methodology, but it also presents significant challenges.

When every minute of downtime represents significant lost revenue and increased support costs, it stands to reason that application support should be just as agile as application development. Among other things, this means tearing down l ong-standing walls between teams, and getting all business units working together toward common goals. 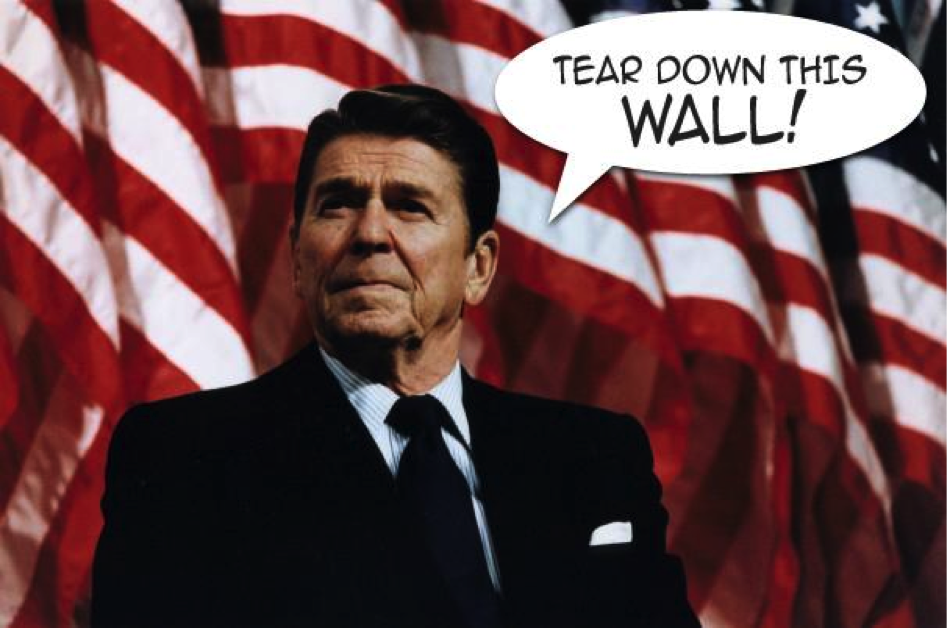 Image courtesy of the Reagan Library and Michael Evans

With agile development, those walls were primarily between the developers and the business group or end customer. Feedback was rarely solicited, and documentation was valued far more than collaboration.

Agile support has its own set of walls. Developers and ops managers are constantly at odds. “Worked in Dev - it’s Ops’ problem now” is not an uncommon sentiment. Ops often have similar opinions of developers.

The principles that have made agile development a success can (and should!) be carried through to the support of production applications. Start thinking in terms of individuals and interactions, rather than systems and silos. I don’t care what you call it - lean, agile, DevOps, Kaizen, whatever - implementing these principles is critical to the health of your application (and support team).

Years ago, we built an online training system for some automotive clients, and did some work with Toyota. We created systems and Standard Operating Procedures (SOPs) - not for manufacturing, but for automotive and collision repair. Agile support for vehicles, if you will.

Toyota had partnered with DCR Systems, a chain of collision repair shops whose mission was to reinvent the entire business model - literally designing the building and everything in it for maximum efficiency. The results were impressive: a 60% reduction in repair time and a significant improvement in customer satisfaction while reducing overhead such as facility size by 30% or more. In other words, they were doing significantly more with less, and making customers happier in the process.

So, what does development support have to do with collision repair? Surprisingly, there are a lot of similarities:

DCR Systems tore the collision repair model apart and rebuilt it from scratch to address these shortcomings. Many of their principles can be carried over to the application support process:

This should be common sense. If you fail to plan, you plan to fail. DCR built brand-new facilities specifically designed for efficient, lean workflows. They created a blueprint for success before ever breaking ground. 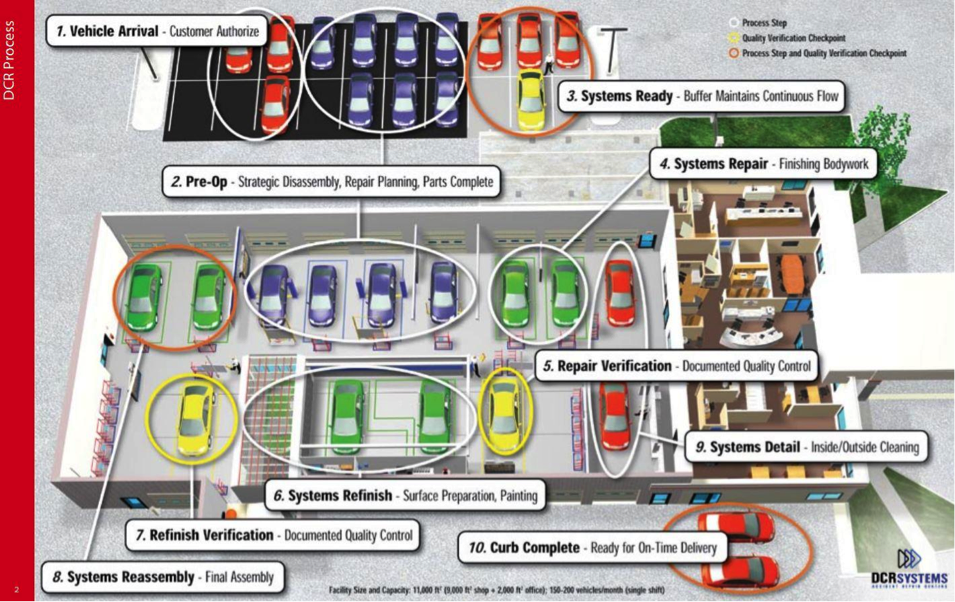 Do your developers follow consistent coding standards? Consistent standards for logging errors and exceptions? Do they name variables, functions and classes uniformly? Are they commenting and documenting their code? Remind your team throughout the development process that each of them will be involved in the support process. Not just supporting their own code, but the code written by their peers.

Beyond the development process, what does the support workflow look like? Have you ever mapped it out in a flow chart? This can be an eye opener. Map out your support process, beginning with a bug being reported and ending with notifying all involved parties that the fix has been implemented and the ticket closed.

Get as detailed as possible. What tools are being used to diagnose problems? Who is involved (list positions, not just “Bob”) at each step? Now, pick 3 to 5 recent bugs and see how well they fit into the ideal workflow you’ve defined. Keep an eye out for the following:

Tear down walls and eliminate bottlenecks

DCR took this one very literally. They found that one major bottleneck was constantly pulling cars into and out of repair bays. In a crowded space with parts and tools scattered haphazardly, how do you move a disassembled car from one station to the next?

Their solution was revolutionary: cars were put on tracks that could be pushed through the shop with minimal effort, without having to start the car. Walls between bays (even the paint booth!) were easily raised and lowered, allowing the car to move through the process as if on an assembly line. 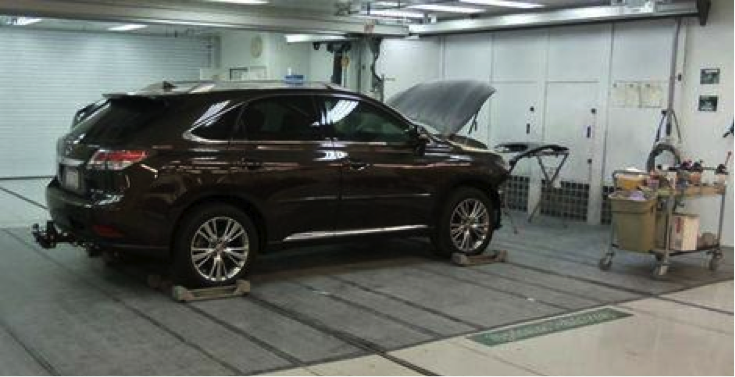 Your walls may be between your dev team and your ops team. Maybe your developers don’t have access to the production environment to monitor application health. Maybe your sysadmins have never been involved in the development process. Maybe the business unit, dev team, and ops all operate largely in a vacuum, each regarding the other two with suspicion and thinly-veiled animosity. Every departmental wall in your organization destroys unity and engenders a “not our problem” mentality.

This goes a little deeper than ensuring that your caffeinated beverage of choice is placed for optimal efficiency. For DCR, this meant clearly defining the purpose for each repair bay, and then placing the right parts and tools (and ONLY the necessary tools) within optimal reach. 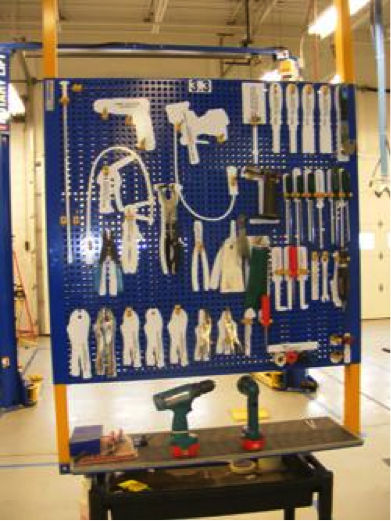 What does this mean for your company? First, take a look at your physical environment. Is there evidence of silos between divisions, based purely on office locations? Could you improve efficiency and collaboration simply by putting dev and ops teams closer together?

What about your tools? Do your developers have access to everything they need to diagnose application errors? Do they have to hunt through numerous log files and bother sysadmins to get the information they need? Are there better tools out there that could automate, aggregate, and simplify these things?

What’s the best way to improve performance? Display current performance very publicly, color-coded to show the good, the bad, and the ugly. If your key performance indicators (KPIs) are visible throughout the office, it creates a new degree of urgency: 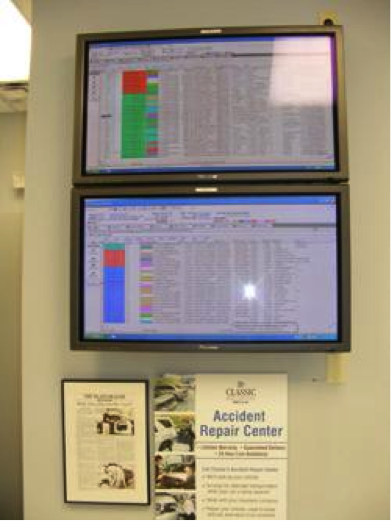 Just as importantly, a status board that shows all green creates a sense of pride. Your application is running at an all-time high load and all systems are performing perfectly? Awesome! Your team just reduced the average ticket time by 15%? Time to celebrate. Which brings me to... Incentivize process improvement

Lean principles only work when there is a culture of continuous improvement within a company. When every person is empowered to make (or at least propose) changes, truly great things happen.

Toyota has legendary stories about this sort of culture. The Kaizen principle states that if a change will save more than two seconds each time a task is performed, it’s worth evaluating. According to Toyota lore, one of the women who made tea in the company cafeteria once received the company’s highest honor for cutting costs by tracking tea consumption by day and time and reducing the amount being wasted.

Does your company culture reward its employees for saying “I think there’s a better way for us to do this,” or do people hesitate to stick their necks out? The DCR Systems culture rewards ingenuity publicly. If someone proposes an improvement that gets adopted, they may receive a gift card to take their spouse out to eat, or might get to take a half day that Friday. Imagine having this conversation with your supervisor:

Dev: Where’s Tom? Supervisor: Oh, you know that idea he had to modify the structure of database calls to perform better under heavy loads? Well, it’s saving us a bunch of time and money, so I gave Tom the afternoon off. He and his wife are having dinner at (insert fancy restaurant name here).

You can bet that’ll start to change your culture.

Kyle Claypool is a technology marketing consultant for Stackify, an application and server monitoring service that facilitates agile application support. Kyle writes and speaks about the intersection of marketing and technology.